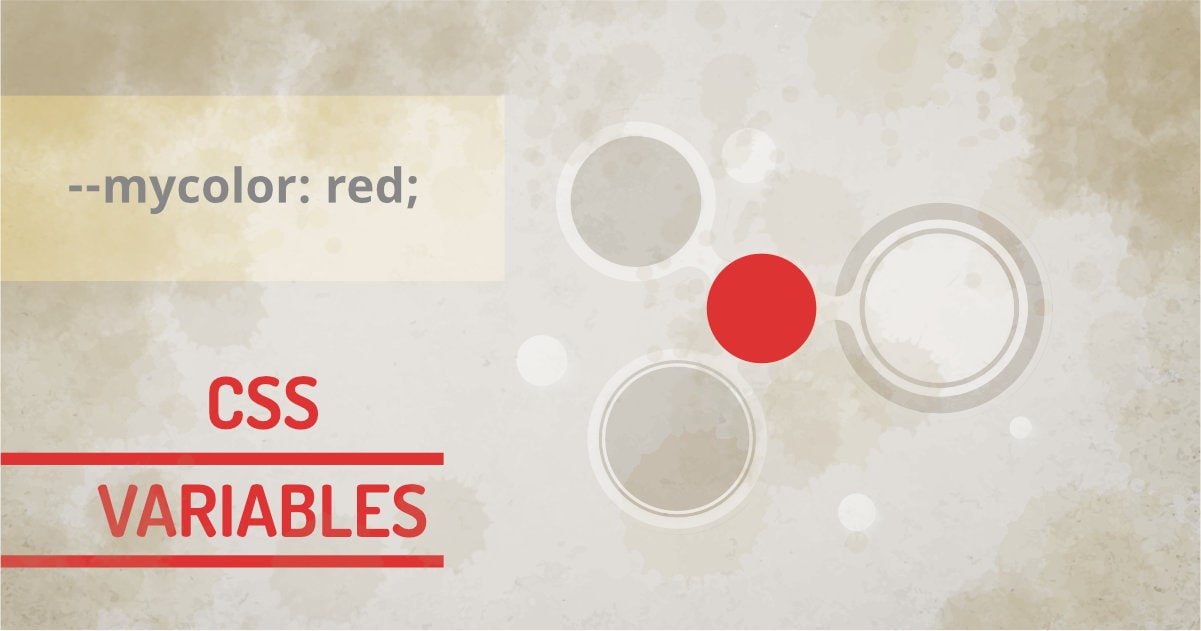 Before the year 2016, designers had this big problem of redefining repetitive properties over and over again. While working on the theme, one has to define some global colors many times in the CSS. Making changes was never too easy with the search and replace the function of IDE. At the time, preprocessors like SASS and LESS helped a lot for CSS generation. The real question here is...

Does CSS have variables?

Programmers often solve the problem of repetitive property assignments by using variables or global variables in CSS. SASS and LESS had the advantage of having the ability to declare variables and use them for further CSS customization without modifying too much code. Guess what? CSS does introduce variables and we can use CSS variables to solve many problems.

Variables are natively supported in all browsers. Well "some browsers" -you guessed it right... still don't have support for CSS variables.

How to use CSS variables:

CSS variables have to be declared inside of the CSS rule. The selector can be any of the valid selectors. If it's a global variable, we can use (:root) selector so the variable will be available for all the other selectors for use. See how this solves the problem of encapsulation by providing the functionality of component-based variables.

We'll use this simple example to understand most concepts of CSS variables.

Observe the colors and the gradient in the background in the infographic. Change the colors to see variables in action. This is the simplest version of CSS variable it could be. Now let's begin.

Where to declare CSS variables:

We can define CSS variables in :root selector globally or inside any CSS selector for local use.

We can define CSS variables using two hyphens ( -- ) and specifying any valid value that its target property can take up.

The variable is not defined at all?

All the properties have some inherited values, If not defined, the property will use that inherited values. We can however specify the default value when using the variable. The alternate version of the var function is as shown below.

Programming languages have different variable types for different purposes. but CSS uses text for variables. So Receiving property will not know if the defined variable gives a valid value or not. This is the limitation of CSS variables. CSS at this point is not showing any error if the specified value is invalid.

If any property receives an invalid value from var() function, it will check the following and substitute the value.

The inline styles have the highest priority over any other styles. Also, inline styles are limited to the applied elements only. Similarly, We can define/re-define the CSS variable by defining it in an inline style tag. So what makes it different than using normal CSS property value and CSS variables?

Well for component-based CSS coding, allows us to override variables using inline style. This means we can change/override any number of variables just using the single style tag. The sub-components will be styled automatically as per their definition.

In below example, we defined variables as follows in component:

our component has elements that uses background values as variables. Changing value of any varible will update backgrounds for the element and the gradient.

Observe the change in inline CSS. See how a change in a variable of component changes the colors of its child element. In this example - colors of circles and gradient below.

Compare this with the bootstrap class method. We can style a button using classes like .btn-primary , .btn-secondary etc. but that would be limited to predefined bootstrap colors only. But if we use CSS variables, we can easily apply any color to the button or set of buttons inside the component.

How to use CSS variables in javascript

On any selected property we can set the variable using followed syntax:

How to name CSS variables:

The most commonly used method is BPM (Block-Property-Modifier) method. It's a bit overhead to variable naming, but you don't have to remember what a variable is doing when using this naming convention. The variable name itself will contain the component name the property and the value of the variable. You can use any of the combinations of Block, Property Name, or Modifier as needed.

If we want to concede something real-time for some reason in CSS, You have to use calc() function correctly. calc() function gives the ability to perform addition, subtraction, multiplication, and division, We can't add any string with the var() function itself.

I think the preprocessor existed because of the incapability or static nature of CSS. But no more. If we can define CSS variables and have them scooped as needed, chances are… we might not need preprocessors. Why not use native functionality and manipulate them with javascript?

The common thing between preprocessor and CSS now, is they both can have variables. Preprocessors are still static as preprocessor variables are compiled down to static values. CSS variables are the actual variables that the browser can parse at a runtime. This leads to the next question...

The answer to why something is slow is because they have something to compute before the actual rendering process. CSS is static for the most part. But if we use something which recalculates the layout too many times, it will slow down the performance. Thinking of the parsing process in CSS, we have a calc function that recalculates widths. Worst is defining a unitless number and using it in a parent container with calc() function. Imagine a container with 1000 elements that will cause too much calculation causing janky performance.

So one should keep in mind that CSS variables are a perfect way to keep our code DRY. but we should avoid using unitless numbers with calc() function. It could trigger a slow performance in some cases.

This boils down to the following practices:

Workaround for CSS variables in IE?

CSS variables were introduced in 2012 and by end of 2016, they were majorly supported. It's been a long time but I think IE doesn't seem to have any plan of using it, so for a time being, we have to just use fallback CSS.

I know you hate it right?

Will you use CSS variables in your next project?

You know now why to use CSS variables and what problems it solves. CSS variables will give you extra control over using legacy methods. You can actually use your coding style more efficiently. Since it's a pure CSS feature and it's mostly supported, You'd better start using it. You'll see how easy it is to maintain and modify.

Just because you can do too much for yourself, doesn't contribute your knowledge to the community. You must share, pass on the ideas and give back to the community. I started this blog to share the techniques and power I possess with the world.